with Ariana and The Rose 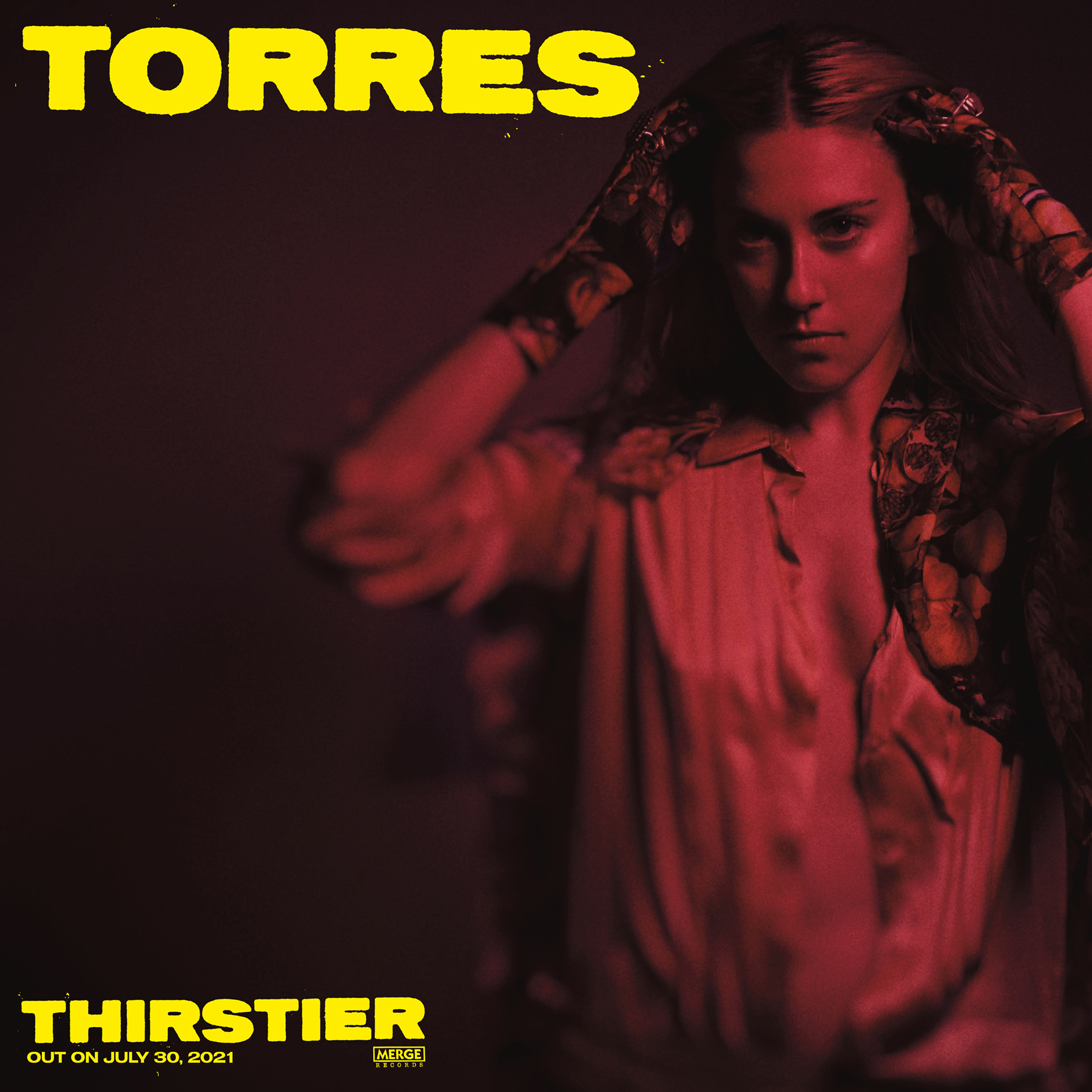 The Torres show previously scheduled for April 9, 2020 and rescheduled to October 8, 2020 has now been moved to Friday, October 8, 2021. Tickets purchased for April 9/October 8 will remain valid for October 8, 2021 with no need to repurchase or have them reissued. We apologize for any inconvenience and appreciate your patience, understanding & continued support.

A person whose words are so potent that they cause the people and beings around them to vibrate is said to have a “silver tongue.” It’s apt, then, that Mackenzie Scott—who has spent the 2010s making boundary-pushing pop music under her TORRES moniker—has chosen to call her fourth album, and first release on Merge, just that.

Recorded at O’Deer in Brooklyn, New York, Silver Tongue is a full-scale realization of the world Scott has created over TORRES’ last few albums. Even when singing in more subdued tones, Scott’s voice is fervent, her lyrics stirring and unyielding as she draws from both the divine and the everyday.

It’s also the first TORRES record produced solely by Scott. After having shared production duties on her first three albums, the latter two alongside PJ Harvey collaborator Rob Ellis, she found the process liberating: “I made exactly the record I want, and it feels very  ‘me.’”

Silver Tongue fastidiously chronicles the impulses that make up desire—from the dreamy first blushes of infatuation through the slightly terrifying wonder that accompanies connection with another. In between, Scott wrestles with the highs and lows of what “being in love” might mean over heady guitars and swirling synths. This is immediate in album opener “Good Scare,” which details the courage one finds when chasing the person of one’s dreams: “When you said you couldn’t swing it, you gave me a good scare for a minute there / I had never seen that look from you before / You were eyeing all the exits.”

While potent vocal hooks punctuate songs like the sparkling “Dressing America,” which combines New Wave glitter with hovering frustration, and the brooding “Good Grief,” which gently pokes at the idea of fetishized sadness, the knottiness lurking underneath reflects Scott’s real-time processing of her emotions while making the record.

“I was trying to make sense of things as they were happening to me,” she says. “It’s more difficult for me to examine something clearly enough to write about it when I’m in the middle of it, and yet that’s what it demands. You’ve got to see things for what they are if you want to make truthful observations about them. When you’re writing about the past, you can manipulate it a little bit to fit a narrative, clean it up some—there’s less room for bending the present.” This desire to stick to the truth manifests in her lyrics, from the exposed longing of “Records of Your Tenderness” (“I can’t get one word in front of the other / You know my mind’s an overgrown orchard / Oh, I do not want this to be over”) to “Two of Everything,” the blistering letter to her lover’s lover (“To the one sharing my lover’s bed / Do you hold her when she sleeps / Does she also call you Baby / You should know she calls me Baby”).

Silver Tongue’s musical world is vast and at times seemingly infinite. Edge-of-the-world synths add gravity to the vulnerability of “Two of Everything,” and refracted guitars offer a gnarled counterpoint to Scott’s increased determination at the end of “Last Forest.” On “Gracious Day,” one of TORRES’ most forthright love songs, Scott’s voice hovers over a starlit landscape in a way that transcends the mundane and enters the otherworldly as she sings, “Gracious day / You moved in like a wave of quiet grace / No surprise / Honey, I’m gonna love you all my life.”

TORRES’ music has long navigated the space between the physical and the metaphysical, and Silver Tongue faces that conflict head-on, examining the ways in which the actions of others can stir up deep-seated feelings and seemingly alter the space in which one exists.

ABOUT ARIANA AND THE ROSE

People always ask me, “When did you know you wanted to be a performer?” “How did you get started?” “What was the moment you knew?”…I can’t remember.I’ve racked my brain for this one defining moment where all of these pieces of a puzzle came together for me, and I thought, “Yes! I’m a performer!”

The truth is, the only thing I’ve ever known, the only thing that stays consistent for me after 15 years of performing is how it feels. How it feels to effect a room of people. To bring them together, whether its a class of dancers all moving in unison or a concert where I get to stand on a stage and see the music wash over an audience, that is the feeling. That is the thing that hit me and has never left.

I believe art can unify the world. I wouldn’t consider myself a consummate optimist, I’m a New Yorker after all, but I do believe in that. A song, a film, a performance, can unify a room. For a split second, strangers feel like they know one another and the differences that can so often divide us can, for this one moment, disappear. I believe art can bring the best parts of us to the surface and in a few magic cases, inspire to share the hidden parts of ourselves with the world.

It can expand our souls, so we’re 10 feet tall and open otherwise closed hearts. It can surpass language, upbringing, and even religion because ultimately, it’s a feeling. A feeling, which keeps us listening to the same song on repeat and watching a movie we’ve seen a hundred times.

That is why I am a performer; because I want to be apart of that feeling. I want to create a space for people to find that for themselves. I call myself a performer rather than only a musician because ultimately, that feeling comes for me when I give my art away. When the song is released, or the show is happening, when the audience gets to have it.

I believe art can be thought-provoking and smart and accessible. It can be fun and joyful and serious and intelligent, all at the same time. It can be complex because the most touching performances can be contradictory, just as we are.

I don’t think I always knew why I had to make music or put on a show. Because honestly, it’s hard. And often the road feels long with no rest stops in sight. But what I know, is that everyone needs a place to step off of their road, to have a place just for themselves and the best art provides that. I want to provide that. To make the place, the song, the show, the experience that allows someone to fill themselves back up again.

So for one second or minute or hour, we’re not strangers barreling down our roads, we’re a collective, all feeling that same thing that doesn’t just get us through, but makes us feel completely alive.