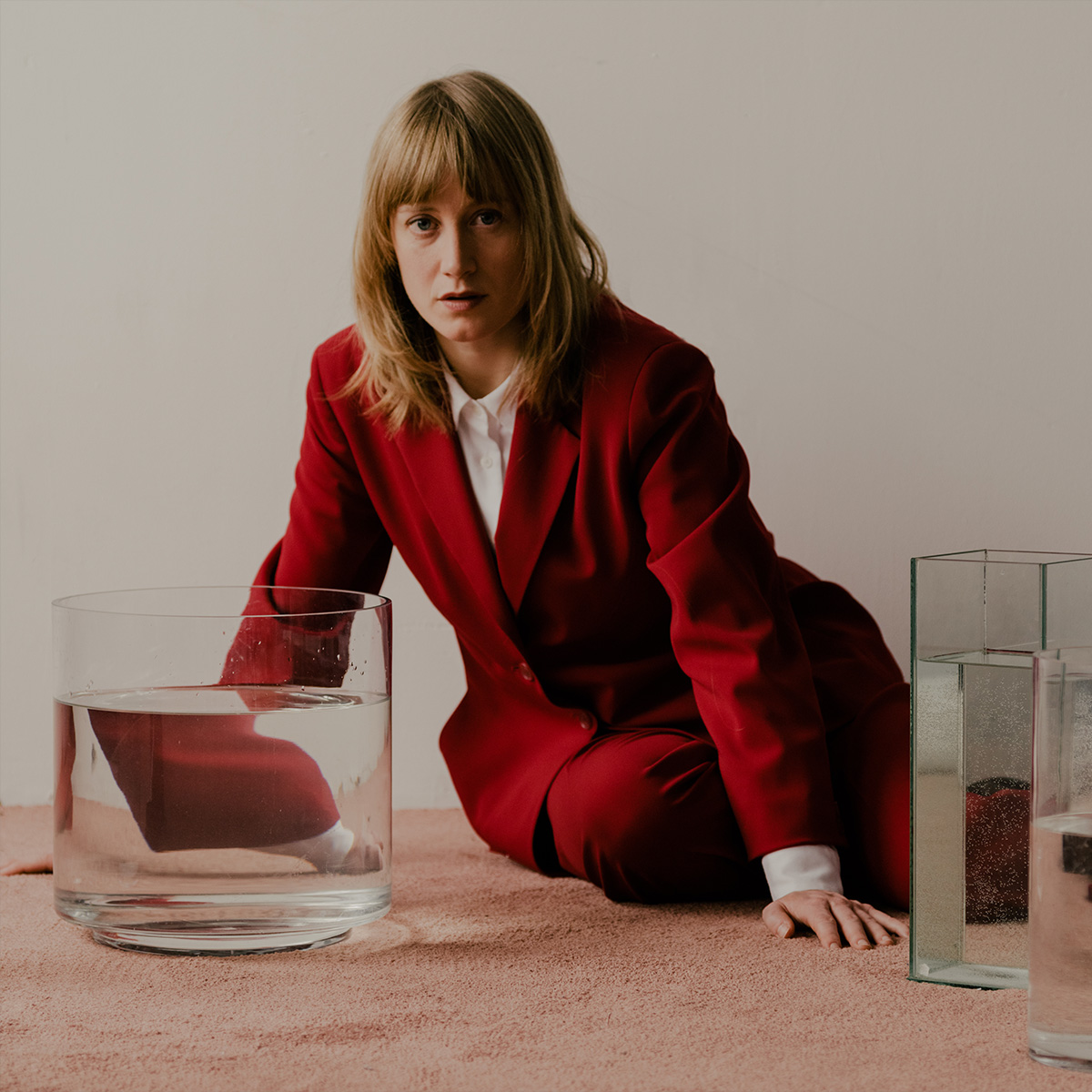 ABOUT THE WEATHER STATION

“Most people are afraid of the dark…Many adults fear, above all, the darkness that is the unknown, the unseeable, the obscure. And yet the night in which distinctions and definitions cannot be readily made is the same night in which love is made, in which things merge, change, become enchanted, aroused, impregnated, possessed, released, renewed.” – Rebecca Solnit

Ignorance, the new album by the The Weather Station, begins enigmatically; a hissing hi hat, a stuttering drum beat. A full minute passes before the entry of Tamara Lindeman’s voice, gentle, conversational, intoning; “I never believed in the robber”. A jagged music builds, with stabbing strings, saxophone, and several layers of percussion, and the song undulates through five minutes of growing tension, seesawing between just two chords. Once again, Toronto songwriter Tamara Lindeman has remade what The Weather Station sounds like; once again, she has used the occasion of a new record to create a new sonic landscape, tailor-made to express an emotional idea. Ignorance, Lindeman’s debut for Mississippi label Fat Possum Records, is sensuous, ravishing, as hi fi a record as Lindeman has ever made, breaking into pure pop at moments, at others a dense wilderness of notes; a deeply rhythmic, deeply painful record that feels more urgent, more clear than her work ever has.

The album began, in Lindeman’s telling, when she became obsessed with rhythm; specifically straight rhythm, dance rhythm, those achingly simple beats that had never showed up on a Weather Station album before. “I realized how profound and emotional straight time could be” she says; “those eternal dance rhythms, how they effect you on a physical level.” Lindeman’s sense of time has always been elastic; movable, responding to the moment. But embracing straight time opened new musical territory for her; “I saw how the less emotion there was in the rhythm, the more room there was for emotion in the rest of the music, the more freedom I had vocally.” She began to envision a band and a music as a sort of bedrock, a structure firm enough to hold the vulnerability of the songs.

The album marks her first experience writing on keyboard, not guitar, and her first time building out arrangements, both with keyboard and with MIDI, before bringing them to a band. Ignorance lets go of most of the folk or roots inclinations that coloured Weather Station albums of the past; whereas the S/T felt steeped in Young and Dylan, this album has flashes of The Colour of Spring or Avalon or Tusk. Most of the songs are underlaid with pure rhythm: a disco beat, a rock beat, played with emotion and precision by Kieran Adams (Diana). The bass, played by Ben Whiteley, similarly hews to the straight and narrow; sometimes not changing notes for minutes at a time. But these straight musical elements are paired deliberately with elements of chance and freedom. Percussionist Philippe Melanson (Bernice) was given his own booth and free reign to improvise on each take, filling each song with rhythmic surprise. Lindeman brought in jazz musicians Brodie West (The Ex) on saxophone and Ryan Driver (Eric Chenaux) on flute, asking them to work against the music in their improvisations. The band was rounded out by Johnny Spence (Tegan and Sara) on keys and Christine Bougie (Bahamas) on guitar; Lindeman played piano, sang, and contributed distorted guitar solos. Montreal producer Marcus Paquin (Arcade Fire) co-produced, with Lindeman, and also mixed the record. It was the first time Lindeman had financial headroom to be ambitious in the studio, an experience she wanted to lean into, moving deliberately away from the lo fi recording processes she adhered to in the past. Indeed the album is confident, polished, no creaking edges, no hum or hiss; it’s so easy to listen to one almost doesn’t notice how heavy it is.

Ignorance is deeply emotional, the lyrics roiling with conflict. “Separated” enumerates an acidic series of miscommunications; “separated by the relief you want to feel / separated by the belief this cut can heal”, and “Trust” describes a divorce, whether literal or metaphysical. On “Indifference” a song Lindeman almost cut from the record several times, because “it felt too vulnerable”, she sings of love, and softness: “my dumb touch / is always reaching / for green for soft / for yielding.” The album sounds profoundly personal; but Lindeman waves off personal questions as to the subject matter of the album. She prefers instead to talk about the planet. The album was written in winter of 2019 and recorded that spring (COVID-19 delays are the reason why we are only hearing it now, in 2021). “The deepest emotional experience I had that winter” Lindeman explains, “was reading the IPCC special report on 1.5 degrees”. She’s serious; though she notes that “nobody believes me when I say that.” She attributes that to a failure of imagination, a lack of belief culturally that a relationship to the world can be as profound, as emotional, as a relationship to another person. “The songs function on a cosmic and personal level” she says, “it’s always been that way for me”.

Indeed, the natural world is everywhere on this record. But it is not there to provide scenery or beauty; rather it intrudes with force and poignancy. “Parking Lot”, the closest Lindeman has ever come to a pop single, spends its full three minutes in contemplation of a bird; “Atlantic” finds the narrator prone on a cliff, watching a sunset as frightening as it is beautiful, “blood red floods the Atlantic”. The divorce described on ‘Trust’ feels metaphysical; with evidence presented to court in the form of “baskets of wild roses / crumpled petals and misshapen heads of reeds and rushes / bodies of the common birds / robins crows and thrushes”. Again and again, the narrator of the album confronts characters who turn away from love; the bumbling subject ‘Tried To Tell You’ “with blood on your hands / from the river inside / you try to deny it” the subject of ‘Loss’, laid out in bed, so consumed by story that they cannot see straight. “Don’t ask me for indifference / don’t come to me for distance” Lindeman sings, repeatedly describing her own vulnerability; “I don’t have the heart / to conceal my love.” Whether or not these songs are meant to be only about the planet, they do not resemble protest songs, with their simplicity and clarity. Rather, the album is shadowed by brokenness and misconnection, a sort of elemental and ubiquitous pain, as Lindeman sings; “Everywhere we go there is an outside / over all these ceilings hangs a sky / and it kills me when I / see some bird fly”.

On the cover, Lindeman lays in the woods, wearing a hand made suit covered in mirrors. She was struck by the compulsion to build a mirror suit on tour one summer, assembling it in a hotel room in PEI and at a friend’s place in Halifax. “I used to be an actor, now I’m a performer” she says. In those roles, she points out, she often finds herself to be the subject of projection, reflecting back the ideas and emotions of others. On the album, she sings of trying to wear the world as a kind of ill fitting, torn garment, dangerously cold; “it does not keep me warm / I cannot ever seem to fasten it” and of walking the streets in it, so disguised, so exposed. Photographed by visual artist Jeff Bierk in midday, the cover purposefully calls to mind Renaissance paintings; with rich blacks and deep colour, and an incongruous blue sky glimpsed through the trees.

The title of the album, Ignorance, feels confrontational, calling to mind perhaps wilful ignorance, but Lindeman insists she meant it in a different context. In 1915 Virginia Woolfe wrote: “the future is dark, which is the best thing a future can be, I think.” Written amidst the brutal first world war, the darkness of the future connoted for Woolfe a not knowing, which by definition holds a sliver of hope; the possibility for something, somewhere, to change. In french, the verb ignorer connotes a humble, unashamed not knowing, and it is this ignorance Lindeman refers to here; the blank space at an intersection of hope and despair, a darkness that does not have to be dark.