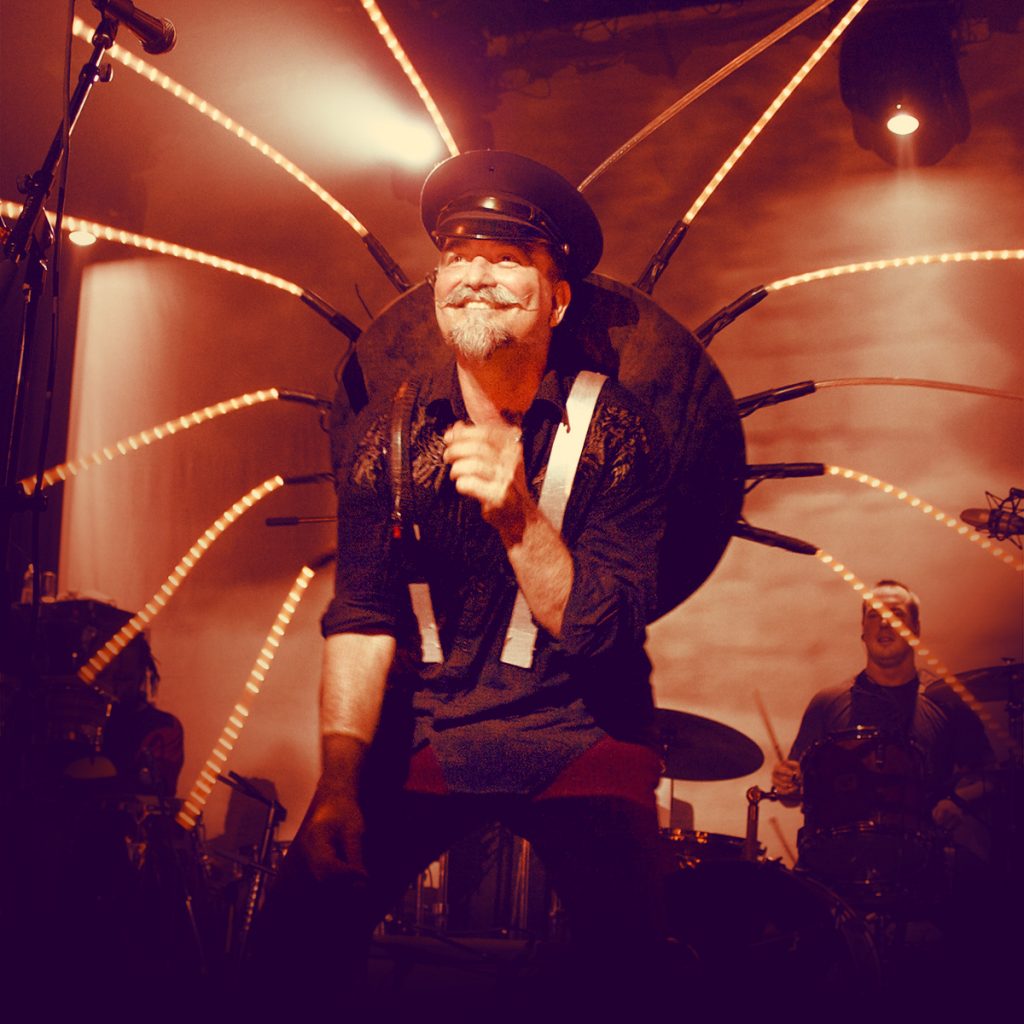 30 years on, upwards of 15 band members; Poi Dog Pondering continue to thrive & evolve on their 8th full length album entitled “Everybody’s Got A Star”. Their unique signature ‘Acous-tronic’ blend of orchestral, rock and dance music influences, shine through with PDP’s ever present irreverence to stylistic conformity.

“Everybody’s Got A Star” is an unapologetic off-road venture, a Joy Ride recalling the vibe of 80’s/90’s Night Club DJs, adventurous enough to careen from one genre to the next, with a slight membrane of madness to the method.
“Growing up in Honolulu, we really only had one good Live Music/Disco/ Club; The Wave. It was Punk Rock/New Wave kids from 9 to 2am, then a Gay Disco from 2am to 4am. Everybody mixing it up & having fun. You could hear everything from Iggy Pop’s “Lust for life”, to Loose Joints “Is it all over my face”. I’m super thankful for that eclecticism. Music for dancing is like an elliptical orbit, it’s always been around me, sometimes it swings in real close and sweeps me along full force for a while.
For me… this record is about; trusting & following the spark of an idea. The thought that kept running through my head while working on this album, was… “”if it excites you, follow it / Let the song be what ever it wants be / let the album be what ever it want’s to be. Realize each idea, & keep moving”. – Frank Orrall

Poi Dog Pondering keeps thriving because their ethic has always been about following their musical heart. Their steadfast independence has allowed them to perennially bloom. From bohemian street buskers to impossible to market major label sacrificial lambs, to hard won autonomy with their own record label; Poi dog pondering have ripened into staunchly independent musical voyagers. They have let every sound that excited them flow through their music and flood it with ever changing colors: Orchestral, Acoustic and Electronic textures. Rock Band Disco, Chicago Stepper Soul & their unique ‘Soul Sonic Orchestra’ Sound. (Threaded all along the way with ‘heart on the sleeve’ lyrics that embrace the beauty and pain of everyday life).

30 years down the line there is a bolstered sense of history within the band now. A swagger that comes from having steadfastly carved their own path. It is quite apparent that PDP has always been, and ever will be, in-it-for-the-love-of-it; creating and performing. Line up changes are par for the course. PDP is an organic entity, it changes like life does. But there is a core with strong roots & deep personal history, open to new ears and ready to experiment. That’s what keeps it vibrant.

Abra Moore has learned a few things about music, life and the intrinsic value of happiness and balance. The quiet confidence she’s found seeps through every element of On The Way, the new record she’s made with long-time collaborator and producer Mitch Watkins. The new collection is subtle, seductive and assured. In her own words, it’s a “gentle sway” of an album. It recaptures the organic, intuitive style that led to a GRAMMY– nomination and worldwide acclaim for her breakthrough album, Strangest Places. It’s been an interesting journey that brought Moore to where she is today and ultimately settling into a productive and satisfying life in Austin, Texas.

The journey began in Hawaii. Although born in California, her family soon moved to Hawaii where she remembers growing up immersed in creativity and surrounded by music. Her older brother was an accomplished jazz musician and her father was a painter. The house was always filled with music – from jazz greats to soul music and rock and roll. The eclectic mix had a profound impact on Moore as she began to explore her own creativity through music. She began creating in a very free atmosphere, one without boundaries.

Upon moving to New York to study at age 15, she began playing piano. She very quickly began experimenting and adding her own bits to songs she was learning. “To be able to express emotions and life experiences through music and song was very liberating,” she says. “At an early age, I learned to communicate in a very intrinsic and meaningful way through songs. I was hooked from then on.”

Not only was music destined to satisfy her soul, it would literally take her around the world with the group Poi Dog Pondering. As a founding member of Poi Dog, she was able to dive into music as a fulltime career. The band eventually relocated from Hawaii to Austin, Texas. That’s how Moore landed in the city she’s called home for more than a decade. However, after she left the group, she lived in France and Italy for a year working as a musician singing American standards on the streets and in cafes. When she returned to Austin, she purchased a 4-track and began recording demos for Sing, her solo debut on the independent Bohemia Beat label. Sing got the attention of Sarah McLachlan, who was a huge fan of the record. A few years later, McLachlan invited Abra to be a part of the Lilith Fair.

Sing also caught the ears of Arista Records. She was signed to Arista Austin and released her seminal Strangest Places album. Moore broke through when her hit-to-be, “Four Leaf Clover,” ended up all over the airwaves and video channels (MTV, VH1), subsequently earning Moore a GRAMMYT– nomination in the Best Female Rock Vocal Performance category. In addition to a spot on the Lilith Fair, the buzz surrounding the album led to tours with Matchbox 20, Barenaked Ladies and Collective Soul.

Shortly after the success of Strangest Places, Clive Davis left Arista to form J Records. Moore was one the acts he took along. Coupled with her newfound national exposure, being on a major label opened other doors for Moore, including a national ad campaign for Perry Ellis.

There were advantages of working for a major label, but there were also demands and pressures that went along with the perks. During this time, she wrote and recorded an album called No Fear, but ultimately decided not to release it. She left J Records without the album seeing the light of day. “It was an amazing experience working with Clive Davis and J Records,” she says of her stint at a major label. “When the album was done, it just didn’t feel like me. They were gracious enough to let me walk away with the album. Everything happens for a reason and my life took a hard turn at that time. I was fortunate to have time to deal with life. Call it fate or whatever you want, but things worked out.”

One of the hard turns was the death of her father. After becoming ill, he made the decision that he wanted to die at home. It fell to Moore and her sisters to take care of him in his final days—days in which he refused to give up painting. He died literally with brush in hand. It would be a few years before she released another album—Everything Changed on Koch Records. In many ways the record was a stepping-stone, one that brought her closer to the shoot-straight-from-the-heart style that launched her as singer. She steps more fully into that mode on her new record, On The Way, which is being released on the Seattle-based independent label Sarathan Records.

On The Way finds Moore at ease in her own skin and voice. It’s a ferociously quiet album that unfolds gently but packs an emotional wallop with its unwavering honesty. It’s an album full of subtle moods. In many ways, On The Way captures the cinematic magic of a great film. From the opening seduction of “Into The Sunset” to the closing reprise of the title track, it transports the listener to a different space. It’s a roll-the-windows-down-and-drive kind of record. “Making this record I found the sweet balance,” says Moore. “My life is good and happy. These songs are little snapshots of where I’m at. I tried to capture and present these experiences as honestly as I could. If you just stay honest and true, you’ll connect with the listeners. You become part of their lives. That’s a privilege you can’t take for granted.”

Part of Moore’s journey has been rediscovering the joy of simply singing for the love of the music. To that end, she’s been revisiting one her favorite pastimes—singing jazz standards. It’s something she did in Austin in the early 90s before she headed of to Europe. She’s been doing it again without fanfare for the past couple of years. “Singing jazz standards four hours a night, taking little baby breaks, keeps me grounded and connected,” she says. “It’s something I can always do. It’s something I’ll have when I’m an old lady. It’s great for my voice. It keeps it strong. Vocally it keeps that instrument flying.”

Reveling in the sheer joy of making music, living in the moment and enjoying the process is an integral part of Moore’s journey. That’s why On The Way is so aptly titled. It’s all about the journey—life unfolding in all its mystery, agony and majesty. True art holds a mirror up and reflects back the hard truths, as well as the ones that enlighten. On The Way is a masterpiece of mood and honesty from one of the preeminent artists working in popular music.