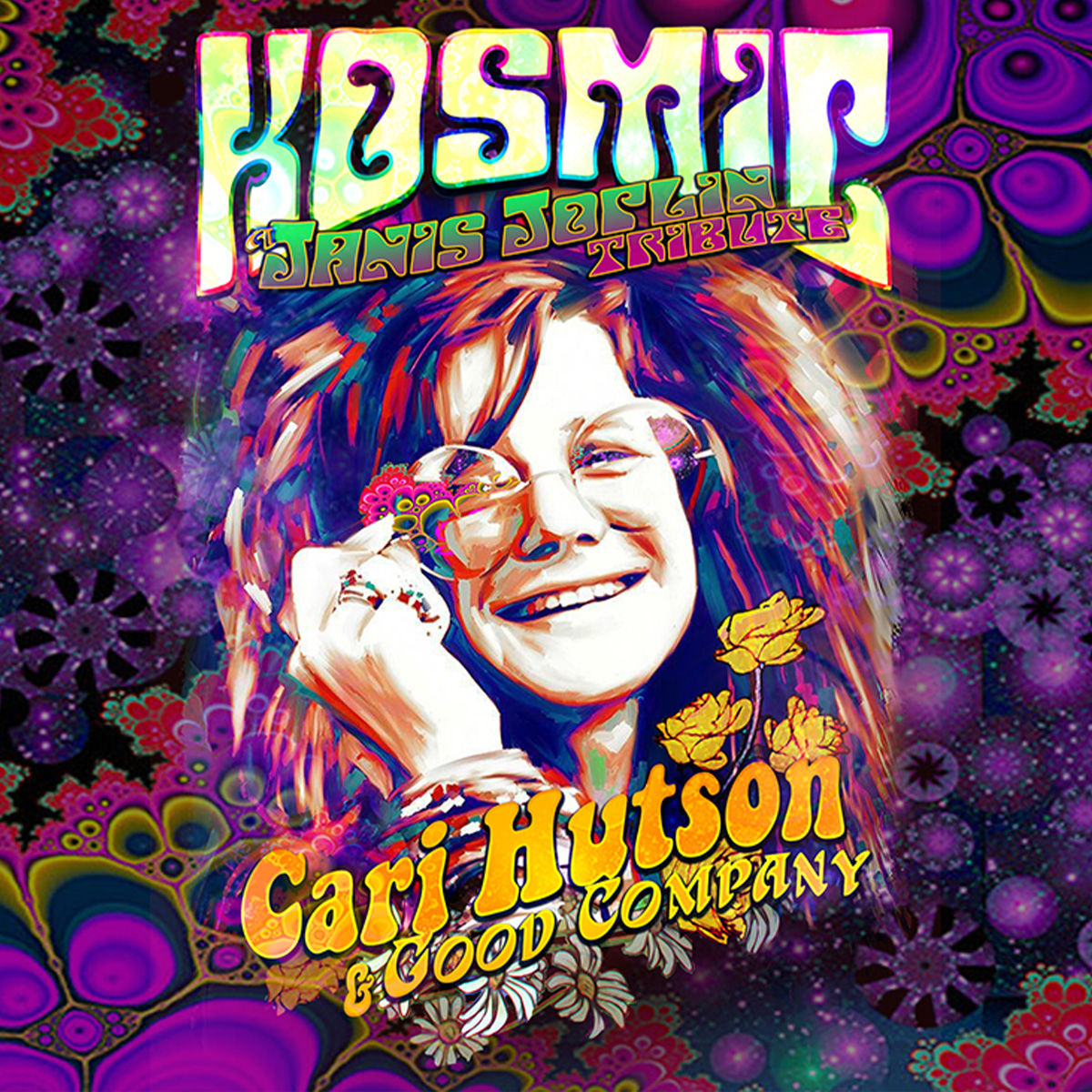 In August of 2020, after 20-plus years of belting her lungs out onstage in more bands than she can keep track of, Austin singer-songwriter Cari Hutson laid down what may be the best vocal track of her career to date in the closet of her master bedroom. The song was “Blame,” co-written with her husband Hunter St. Marie and recorded soup-to-nuts in their home during quarantine lockdown. Her husband, the lead guitarist in her band Good Company, played every instrument on the track save for some keys added remotely by bandmate Bryce Powell, then set immediately to work planning and editing together a video with Hutson while the song was sent off for mastering. They were racing the clock, hellbent to have both the song and video out before the Nov. 3 election — even if only by a matter of days.

“It started from a conversation Hunter and I were having when we took a trip out to Galveston to visit his parents, to let our daughter be with her grandparents,” says Hutson. “We were talking about the state of the world and how we felt as parents ourselves, knowing what our daughter’s going to be growing up in, and Hunter kind of mumbled something to himself about ‘blame, blame, blame’ — as in our president constantly pushing blame and never owning up to any wrong doing. Then Hunter got a call from a friend, but I opened up my notes on my phone to put some thoughts down and the song just took off … like it wrote itself.

“It all came from … I was just angry, you know?” she continues. “I was angry at the state of the world, and politics in general, but most of all angry at my feeling a lack of being able to control anything, because I’m a mom and I’m a woman who deserves to live in a world where I matter. So it was a song that I just had to write and that I wanted as many people as possible to hear as soon as possible. Not because I think I’m going to change anybody’s mind, but because I I really needed to get it off my chest. And I also know that I’m probably going to piss some people off, but … I’m really ok with that.”

“Blame” will be released Friday, Oct. 30. It’s the first single from an as yet-untitled, five-song EP that Hutson aims to have out in February 2021 — and her first release since her second full-length album, 2016’s Don’t Rain on My Sunny Day. A second single, “The Rescue” — an equally powerful and deeply personal song Hutson wrote about her late mother — will follow in December, marking the one-year anniversary of the night Hutson and her band were awarded a $20,000 grant at the annual Black Fret “Black Ball” at the Austin’s ACL Live.

Needless to say, Hutson and Good Company had big plans for how to use that grant in 2020 that didn’t quite pan out, what with the worldwide COVID-19 pandemic and all. But as the ferociously uncompromising “Blame” makes clear, this is not an artist content to make excuses for lost time or play woe-is-me. Hutson is a woman ready to roar, fit to fight, and determined to make every word she writes and note she sings going forward not just worth the wait but above all, matter.

Hutson, a military brat, was born in Austin but spent her formative years in Southern California, Okinawa, Japan, and Slidell, Louisiana. It was as a teenager, “sneaking off” with her girlfriends to nearby New Orleans, that she experienced her first taste of live music in a club setting, via the Preservation Hall Jazz Band. “It was something I’d never seen before,” she says, marveling at the palpable electric charge of passion and intimate connection that blurred the line between the band and audience. “And just kind of realizing that to make live music, you don’t have to be young and pretty per se or even mainstream — it really kind of blew my head open.”

That awakening synced up nicely with her move back to the live music hotbed of Austin for college — or close enough, anyway. She landed in San Marcos, 30 miles south, ostensibly to study musical theater at Southwest Texas State — but her real education came off campus, singing in sweaty rehearsal spaces (Tom Thumb Mini-storage units) and even sweatier bars with her first two bands, Remedy and Blu Funk Junction. Hutson had always been a natural onstage, dancing and singing in talent contests and school theater productions throughout childhood. But performing as part of a live band, freestyle and in-the-moment, was truly her calling — so clearly that even her college theater professor encouraged her to take a leap of faith. “He asked me what my plans were, if I had any interest in teaching or working behind the scenes, or if I was just pursuing a performance degree to be a performer,” she recalls. When she told him the latter, he told her, straight up, “Well, you should just go do that, then —we can’t teach you to do that any more than you already know.”

“I was really stunned, because I never expected a professor to tell me to drop out of school,” she says with a laugh. “But he wasn’t the only one. So around the beginning of my junior year, I just stopped going. I’m not really proud of that, and it was never really a conversation I had with my parents or even my boyfriend at the time, who was the drummer in my first band. He probably would have been like, ‘What are you doing?’ But I’m such a dreamer, I get real caught up in my head and I just had the bug. I started writing my own songs and fell so in love with the idea of playing live music with an original band that I just fell headfirst into it.”

Hutson had found her passion, but it wasn’t she until she tapped into her inner Janis Joplin — with a little help from her own “big brother” — that she became aware of her full mojo.

“My older brother, Coy, had a blues band when he was in high school, so I heard a lot of blues coming from his bedroom when I was growing up,” she recalls. “I didn’t really understand it at the time, because I was mostly listening to Janet Jackson and Paula Abdul — I was super into pop singers that moved, because I didn’t know I could sing yet and just wanted to be a dancer. But my brother was always a huge influence on me with the blues, and years later when I was in Blu Funk Junction, this nine-piece band that had a horn section and a really big sound, it was Coy who brought me this song of Janis’ that had horns on it, ‘Try.’ He said, ‘Cari, I think you guys should cover this!’”

The band agreed and worked it up just in time for what would prove to be their first really big gig, opening for Bob Schneider’s immensely popular band the Scabs at the Steamboat in Austin. The house was packed and Blu Funk rose to the occasion, and when they got to the Joplin tune, Hutson went for broke. “Up until that moment, I had never sung the chorus out full, because we’d only practiced it in our storage unit and I was afraid I couldn’t hit the note and also didn’t want to scream everybody’s heads off. But that first time singing it at Steamboat, I just went all out, and I’ll never forget my brother standing there in the second row with his arms in the air going ‘That’s my sister!’ I was as shocked as he was that I did it, but I thought, ‘Ok, that’s what that feels like!’

“After that, I sang differently,” she continues. “It changed the whole way that I wrote and how I accessed my voice. I didn’t always sing like that, but I knew I had it in me. I knew that I could wail.”

Hutson would ride that wail though the rest of her Blu Funk run rocking Austin’s Sixth Street (as well as many a memorable night back down in San Marcos), and it continued to sustain her all through the first decade of the new century as she juggled multiple part-time gigs in cover bands like Rotel and the Hot Tomatoes and Party Posse while working steadily toward a new project to call her own. With help from Jim Drew, a master plumber turned talented guitar player that she met on Craigslist, she began playing shows under her own name and released her self-titled solo debut in 2011. But as proud as she was (and remains) of the songs on that album, she knew in her gut that the recording didn’t really capture her at her very best. Local Grammy winning artist Christopher Cross, who’d seen Hutson sing live onstage before, confirmed as much after she’d given him a copy and asked for his honest opinion.

“He told me, ‘It sounds really pretty, but where are you? You’re gritty and you’re soulful and you have attitude, and I don’t hear any of that in here.”

The honest criticism might have stung, but it also put Hutson right back on track. “I didn’t realize at the time I was writing that record that I was writing from someone else’s perspective, because I think I was trying too hard to be something else,” she says. “I was trying to be what I thought other people wanted, even in the picture on the cover — like I just needed to feel pretty and cute and for everything to fit in this pretty little package. And so my true style of performing was having a hard time cutting through because the songs weren’t allowing it.”

Lesson learned, she made sure that true style came through loud and clear on her next effort with a vengeance. Produced by soulful Austin roots rocker and acclaimed guitarist Jeff Plankenhorn and recorded “live on the floor” with her own well-seasoned band, Good Company, 2016’s Don’t Rain on My Sunny Day was exactly the kind of calling card Hutson needed to launch the second decade of her career with maximum confidence and swagger.

Songs like “Burn” and the title track were gritty to the core, and her “wail” was very much accounted for — bolder than ever, in fact, after having been exercised to peak form during Hutson’s time performing and touring as “Janis” herself in the Joplin Estate sanctioned theatrical production, A Night with Janis Joplin. Among the new fans (and friends) she won over through that adventure was none other than original Big Brother and the Holding Company drummer Dave Getz, who was so taken with Hutson’s performance that he offered her the prize of “Can’t Be the Only One,” a song he’d written with lyrics Joplin had left behind but never had the chance to sing herself.

Hutson and Good Company’s recording of the song did it proud. “Her interpretation of the lyric and her roots, blues feel brings the song to life,” noted a duly impressed Getz. “If Janis could hear it (and maybe she can), I think she would be pleased.”

As satisfying as “Can’t Be the Only One” and the rest of Don’t Rain on My Sunny Day was, though, with hindsight even that record was just a tease, a mere taste of the artist and performer Hutson was still developing into two decades on from her first shows in college. And now four years, a $20,000 Black Fret grant, and seemingly endless months of live-streamed from home quarantine shows later, Hutson is beyond ready to make and share the most uncompromising and fearless music of her life.

“Blame” is only the beginning, a battle cry before the charge. Just wait until you hear what comes next.