with Broken Teeth and The Black Birds 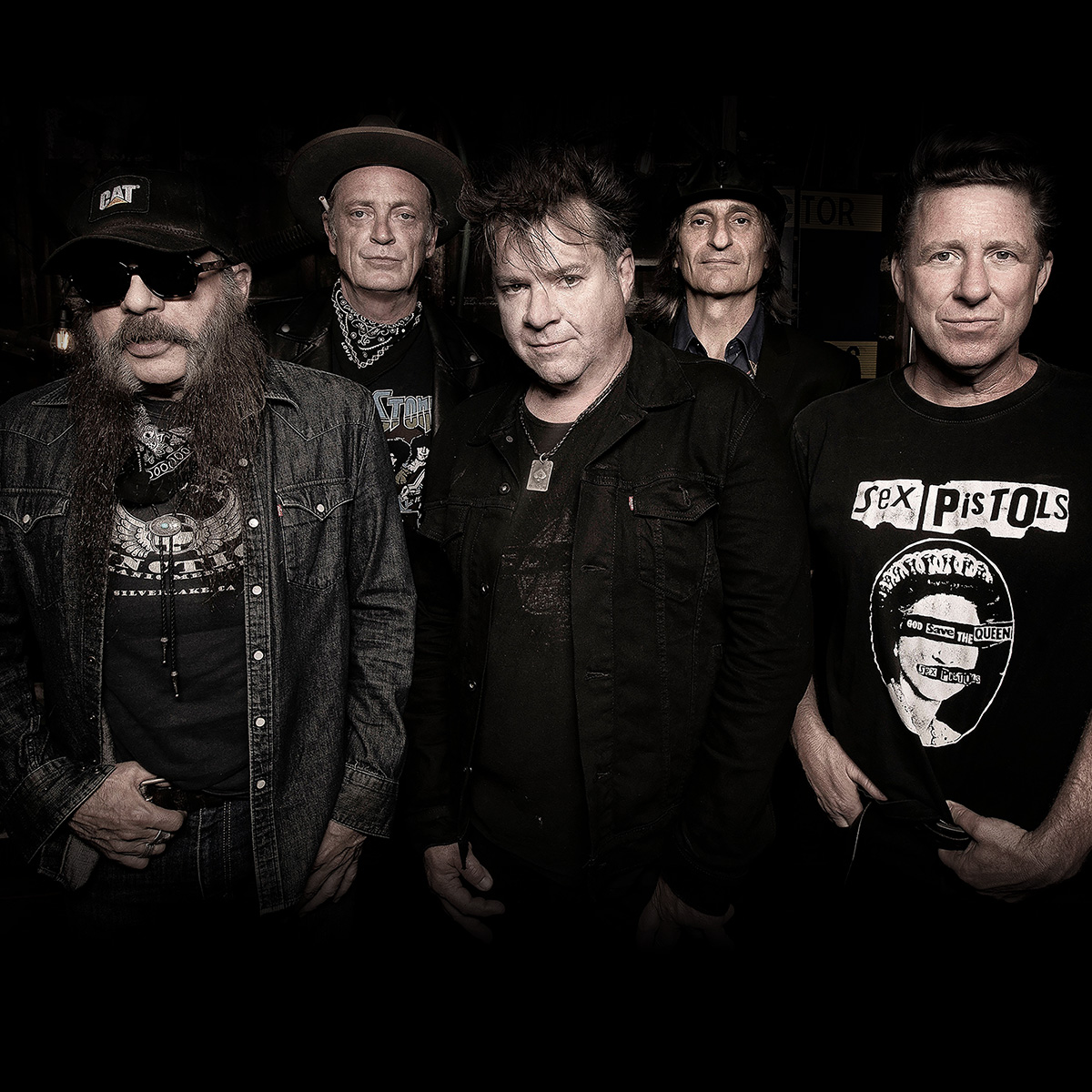 While odds and sods have been released over the decades, “High Water” is a firm statement of the band’s 2017, and onward, intent. As singer and founding member David Roach explains, in recent years, JUNKYARD had a blast playing “reunion” shows, which quickly turned into mini-tours through Spain and packed gigs across America. New songs began percolating, and JUNKYARD began writing.

“I had no grand illusions of a magnum opus, or that we’d try and recreate what we were 25 years ago,” Roach states. “This album is not a departure; it’s a rock ‘n’ roll record from JUNKYARD with songs about life, love, regret, addiction and memories.”

JUNKYARD, who hit MTV and radio hard with their self-titled 1989 Geffen Records debut and singles “Hollywood” and “Simple Man”, cement the authenticity their first two records on “High Water”, such blunt songs as the soul-searching of “Cut From The Same Cloth” to “We Fuck Like We Fight” (politely abbreviated as “WFLWF” for the politically correct) going down as easy as an aged Kentucky bourbon.

“The JUNKYARD sound is a pretty classic one: big guitars and drums with David spilling his guts on top,” says Mosher, who produced the album. We wanted ‘High Water’ to sound loose and live, so as far as production goes we weren’t trying to re- invent the wheel, just deliver the songs in the best light we could, then mix in some big riffs and throaty vocals and that’s ‘YARD.”

JUNKYARD’s classic sound got some help from a fan and friend.  Charlie Starr from the band BLACKBERRY SMOKE wrote the dramatic, forthright statement “Till the Wheels Fall Off” specifically for JUNKYARD.

The band — and it’s legion of longtime fans — is excited that “High Water” brings back JUNKYARD as an ongoing concern. As one of the great guttersnipe L.A. bands of the late ’80s — a storied crew that includes Gun’s and Roses, Little Ceasar, The Hangmen — JUNKYARD were proud to be part of “one of the last great rock ‘n’ roll scenes,” as they term it.

“I don’t think we dated ourselves too badly in the beginning so a lot of our songs still have some relevance,” said Roach. “Also, we were in hibernation a while, we weren’t playing while a lot of our contemporaries were. It’s not so much longevity as it was people who missed us 20 years ago finally have a chance to see us.”

Mosher, who was a fan of the group before joining JUNKYARD in 2000, sees all angles of the JUNKYARD saga…

“Although it’s been 17 years since I joined, I’m still ‘the new guy,’ so with ‘High’, I wanted to give the fans something I would’ve wanted as a JUNKYARD fan — a proper third album,” said Mosher. “It was important to all of us that the record be a statement of intent that could connect with fans from back in the day as well as hopefully find new ones for whom this might be their first ‘YARD record. It’s a tall order, but we’re up for it.”

“THOM AND I BOTH HAVE A LOT OF HISTORY WITH JASON (MCMASTER), AND WE ARE BOTH HUGE FANS OF DANGEROUS TOYS AND WATCHTOWER.  HE IS ONE OF THE GREATEST AND MOST VERSATILE HARD ROCK VOCALISTS AROUND, AND THAT IS DEFINITELY SHOWCASED IN BROKEN TEETH. WE ARE EXTREMELY PROUD TO WELCOME THEM TO THE EMP FAMILY, AND RELEASE THEIR KILLER NEW ALBUM.”

“OBVIOUSLY, WE HAVE THE UTMOST RESPECT FOR DAVE AS BOTH A MUSICIAN AND PROMOTER OF HARD ROCK MUSIC,” SAID BROKEN TEETH VOCALIST JASON MCMASTER. “I HAVE SOME HISTORY WITH DAVE AND THOM, AND COULDN’T BE HAPPIER TO JOIN FORCES WITH THEM AS WE PREPARE TO UNLEASH THE LATEST CHAPTER OF BROKEN TEETH MUSIC.”

ONCE DESCRIBED AS “A PISSED-OFF AC/DC,” BROKEN TEETH HAS EVOLVED INTO A HARD-ROCK/HEAVY METAL BOMB BLAST BUILT ON THE SWAGGERING BOOGIE OF BAD-BOY BLUES. NOT SURPRISINGLY, 4 ON THE FLOOR CONTINUES THE BAND’S GRITTY LEGACY WITH ODES TO THE REBELLIOUS, FORBIDDEN LOVE OF ROCK-N-ROLL (THE SLOW-STOMPING “SINFUL”); STANDING PROUD AS A LONER ( THE RIOTOUS BURNER, “HOUSE OF DAMNATION”); LIFE ON THE ROCK-N-ROLL HIGHWAY TO HELL (THE BLUESY SHUFFLE OF “BORROWED TIME”); AND THE ULTIMATE SALUTE TO LEGENDARY MOTORHEAD MAIN MAN, LEMMY KILMISTER (THE APPROPRIATELY ROLLICKING “NEVER DEAD,” WHICH WAS WRITTEN BEFORE LEMMY’S PASSING).

“WE DON’T REALLY DO TRIBUTES, BUT LEMMY AND THE KIND OF ROCK-N-ROLL HE DID IS WHAT WE’RE ALL ABOUT,” SAID BROKEN TEETH GUITARIST JARED TUTEN. “IT JUST FELT RIGHT FOR BROKEN TEETH TO IMMORTALIZE HIM FOREVER.”