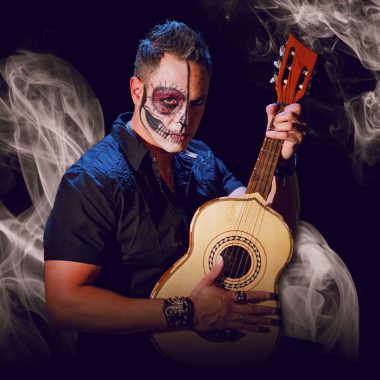 Masks will be mandatory for entry and must remain in place unless seated in your reserved table. Each table is distanced from neighboring groups. All patrons will be asked to complete a health screening at the door, including a temperature check and brief questionnaire. Read our complete safety information here.

Full bar and food service will be available during this event. To encourage a fully contactless experience, select food & beverage items are available for pre-purchase during the purchase process. Food & drink purchased in advance will be available to your party upon arrival, and is non-refundable. For questions about your order, please email info@acl-live.com. You may also order at the event; full food and and drink menus are viewable here. Outside food or drink is not permitted.

Check out the venue layout here.

Tequila Rock Revolution is a metal-fueled, Mariachi-infused spectacle of sight and sound paying homage to the tradition of Mariachi through an unprecedented fusion with modern metal and electronica. The band is the brainchild of Austin’s premiere Latino Rocker/Electric Violinist, Haydn Vitera.

Donning traditional Mexican sugar skull face paint, the 7 to 10-piece supergroup features some of Austin’s top Latin Rock and modern metal musicians alongside some of San Antonio’s most talented Mariachis.

TRR’s version of the Mariachi classic “El Cascabel” is available on all streaming media and the music video featuring their re-imagining of “Remember Me” from the animated film Coco is now on YouTube.