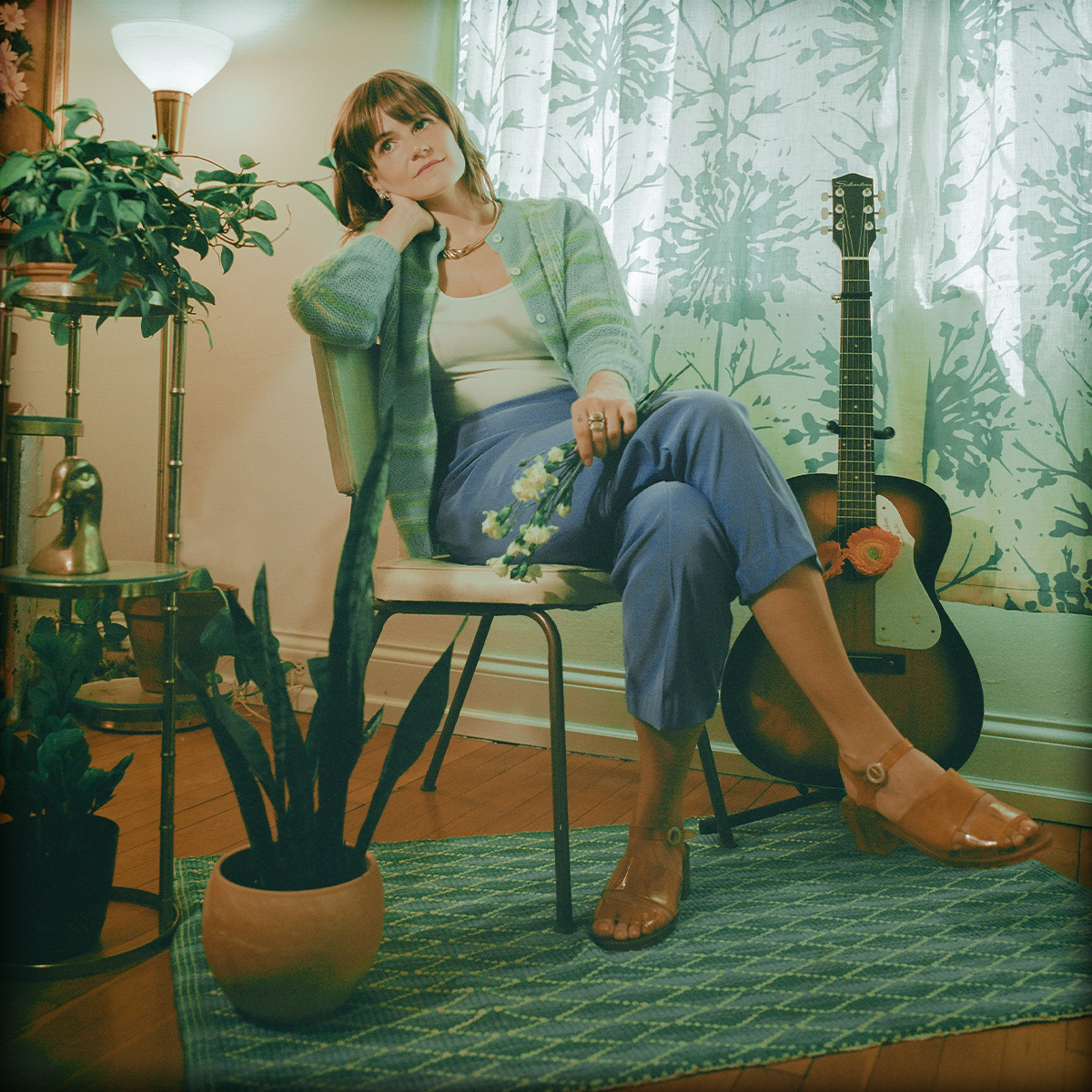 Erin Rae on May 8, 2022 at 3TEN in Austin, Texas has been cancelled. Ticketholders will be emailed directly with refund options.

Three years after the release of her critically acclaimed debut, Putting On Airs, Nashville-raised singer-songwriter Erin Rae shares an intimate, honest, and playful version of herself through her sophomore album Lighten Up. Produced by Jonathan Wilson, and recorded in the musically hallowed grounds of California’s Topanga Canyon, the album represents a sonic and inner shift for Rae. In it, she embraces more of her influences, like baroque-pop, cosmic country, and indie-folk songs while mirroring a more compassionate self-view she calls “accepting my humanness”.

Although she grew up in a musically oriented family, Rae’s pursuit of music happened by accident. After being gifted a Martin acoustic guitar on her 18th birthday, Rae decided to drop out of college after just one semester. Her goal at the time had little to do with making music into a career, and everything to do with spending more time and energy with the community of musicians and writers she knew back home. Looking back on those days, she recalls the initial high of playing live at an open mic during winter break and realizing, “this is how I connect with people. I have to pursue this.”

Rae has continued to connect with people through her music ever since, performing at mainstays like Newport Folk Festival, Red Rocks Amphitheater, and sharing stages with Father John Misty, Hiss Golden Messenger, Jenny Lewis, Jason Isbell, and Iron & Wine. The success of Putting On Airs also earned her a nomination for Emerging Act of The Year at the 2019 Americana Music Awards alongside other trailblazing artists like Yola, Jade Bird, and J.S. Ondara. When the Covid-19 pandemic called a halt to touring, Rae took advantage of the opportunity to revel in a wide range of musical influences she had absorbed since the making of Putting On Airs, sitting in an un-rushed space while
deciding which direction she wanted to take her music next.

Though Rae says the core of her work will always stem from the songwriting she was raised on, the making of Putting On Airs with collaborators Jerry Bernhardt, Dan Knobler, and Dominic Billett inspired her to deepen her music exploration outside the traditional Americana box and listen to records in a broader way. “It opened up a sonic world to me that I had always enjoyed, but that felt mysterious. The process of making my last record allowed me to visualize how recorded sounds come to be, so returning to recordings of beloved artists like Feist, Judee Sill, Wilco, became exciting all over again. “I could suddenly imagine what was happening in the room to create what I was hearing on the recording.” This newfound excitement led Rae down many rabbit holes, particularly a deep-dive into English psych-folk artists like Kevin Ayers and Pete Dello And Friends, as well as songwriters like Gene Clark, Scott Walker, and Jesse Winchester.

That expansive discovery of musicality led her to connect with Wilson, known for his work with artists like Father John Misty, Jenny O., and Roger Waters. Their shared love for the cinematic pop of the Walker Brothers, Bobbie Gentry, and the folk stylings of Margo Guryan created a solid foundation to create together, so Rae flew to Wilson’s Five Star Studios in February 2021. Wilson called on musicians Jake Blanton (Bedouine, The Killers) and Drew Erickson (Weyesblood, Father John Misty) to contribute bass, keys, and string arrangements, and played drums and lead guitars himself. Erin invited friends Kevin Morby and Meg Duffy of Hand Habits to contribute, and Wilson’s longtime friend Ny Oh to sing some of the background vocals. The result is a fresh, authentic, and singular collection of recordings that are clearly rooted in a classic “canyon” sound.

Lighten Up also showcases a new level of personal growth for Rae, and invites listeners to share in the results of her work towards self-acceptance. “My last record was a lot of self-assessment and criticism, and trying to kick old habits and ways of relating to people,” Rae acknowledges. “This one is about blossoming, opening up, and living a little more in the present moment. Accepting what it is to be human.”

In the lead single, “Modern Woman” Rae celebrates womanhood and femininity in all of its forms, countering outdated beliefs over driving drums and rocking guitars and inviting an inclusive perspective through her cheeky lyrics “come see a modern woman.” With “Lighten Up and Try” a song that embodies the album’s title, as well as its ethos, Rae dwells on the process of opening up to love and to life, and the vulnerability that comes with that process. Expounding on the song’s meaning, Rae shares, “This song for me just feels like celebrating the vulnerability of living. Saying yeah, ‘No one really knows what they’re doing. You just have to try.’”

In the measured track, “Mind – Heart” Rae outlines the dangers of codependency, and through the straightforward lyrics, “the mind is fucked but the heart is pure,” she meditates on the unreliability of thoughts. “Both of my parents have practiced meditation throughout my life following different traditions. This song for me is essentially using mindfulness to detach from habitual patterns of thought and behavior, and reconnecting to the heart, the intuition.” In “True Love’s Face” she opens to the potential of love and the choice to not flee from it over retro melodies, affirming through her bell-like vocals, “I will know it when I see it / I will not turn it away.” And in the psychedelic “Candy + Curry” Rae balances awakening and being centered in the present moment, with a soundscape that invites the listener to relax and enjoy the ride.

With Lighten Up, Rae hopes to give listeners the opportunity to borrow what she’s learned, that there can be a lightness when things feel heavy and that even our darkest corners can allow us to shine. “I hope this record encourages people to be a little softer towards themselves.” Rae shares. “If [Lighten Up] gives people listening the space to feel more tender towards themselves and move in the world from that place, that would be the dream for me.

Bay Area-bred singer/songwriter Logan Ledger sets most of his songs in lightless or shadowy spaces: the bottom of the ocean, the abandoned cells of Alcatraz, dreamless bedrooms, desolate streets in the dead of night. Produced by 13-time Grammy winner T Bone Burnett, the Nashville based artist’s self-titled debut matches his moody noir lyricism with a darkly toned take on country music, a sound that’s stylistically wayward yet deeply grounded in classic songmanship.

Ledger’s self-guided musical education began back in the Bay Area, where he first felt compelled to sing after his grandmother introduced him to the music of Roy Orbison. Taking up guitar at age 12, he next began writing songs of his own, along with amassing a huge collection of Smithsonian Folkways CDs. Later, while attending Columbia University, Ledger hosted a bluegrass show on the campus radio station and played in a number of bluegrass bands, then moved to Nashville on a whim not long after graduation. Although his early days in the city were mostly spent working in bars and playing in cover bands, a spontaneously recorded demo of Ledger’s landed in the hands of Dennis Crouch, who then passed it on to Burnett. In summer 2016, the legendary producer invited Ledger out to L.A., and the two soon started working on Ledger’s debut.

Throughout the album, Ledger and Burnett’s immediate chemistry extends to a charmed communion between all the featured musicians. “I love how everyone’s constantly improvising, but without ever getting in anybody else’s way,” Ledger points out. That uninterrupted and possibly transcendent flow is also the desired takeaway for listeners of his debut. “I’d love for people to get into a meditative space when they hear the record, to sit with the songs and really take their time with them,” Ledger says. “I think there’s a value in letting things happen at a much slower pace, especially in our current culture of instant gratification. It’s really not even a conscious decision for me—it’s just how I feel and how I like to do things, so I’m just going to keep going with it.”